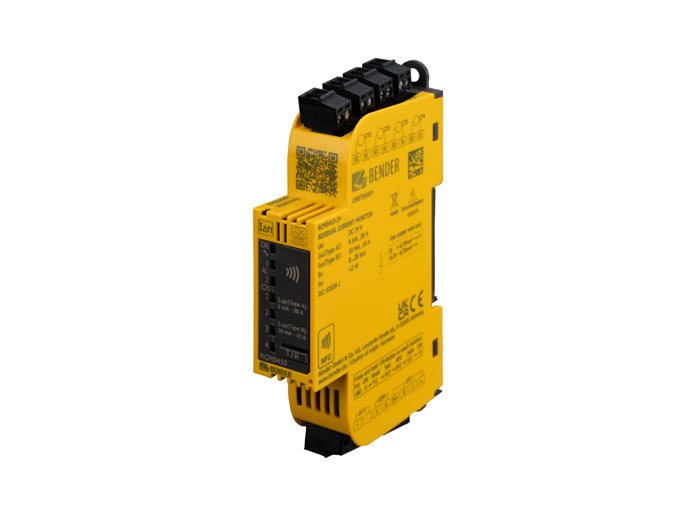 The LINETRAXX® SmartDetect RCMS410 offered by Bender is a new residual current monitor for earthed systems. In compliance with the requirements of DIN EN 62020-1, the latest measuring technology has been employed using four channels in a compact housing. The device is easy to install and commission. It is also characterised by high ease of operation, also the required parameters can be set via the Bender Connect App. The LINETRAXX® SmartDetect RCMS410 is suited for most electrical installations.

The LINETRAXX® SmartDetect RCMS410 is a compact and powerful 4-channel DC, AC, and pulsed DC sensitive residual current monitor for earthed power-supply systems. It measures residual currents between 2 mA and 70 A with direct voltage as well as alternating voltage in a frequency range up to 20 kHz and was developed for flexible use in the most varied applications.

Despite its small size and compact design, the RCMS410 is a real powerhouse. It can monitor up to 4 residual current channels at the same time. Owing to separately adjustable response values, it can distinguish between a prewarning and a main alarm as well as between the RMS value of AC, the RMS value of AC and DC combined, and the RMS value of DC. Specific analysis functions serve to measure and evaluate harmonics up to the 400th harmonic.

With its numerous interfaces the RCMS410 can be easily integrated into new and already existing electrical installations. The device is furnished with a Modbus-RTU interface also used by other manufacturers.

The display and operating elements of the RCMS410 have been reduced to a minimum. Several multi-coloured LEDs show the present status of the installation. Furthermore there is a test/reset button. The parameters required for the electrical installation are set via Modbus RTU or via the NFC interface using the Bender Connect App (also with the device switched off). Default operating parameters already preset on the delivered device are also offered.

So far, the RCMS410 is available as variant for 24 V DC. Further variants are currently under development and will be integrated into this new product series.